To have the optimal experience while using this site, you will need to update your browser. You may want to try one of the following alternatives:

Palmdale is at the Center of History and Progress 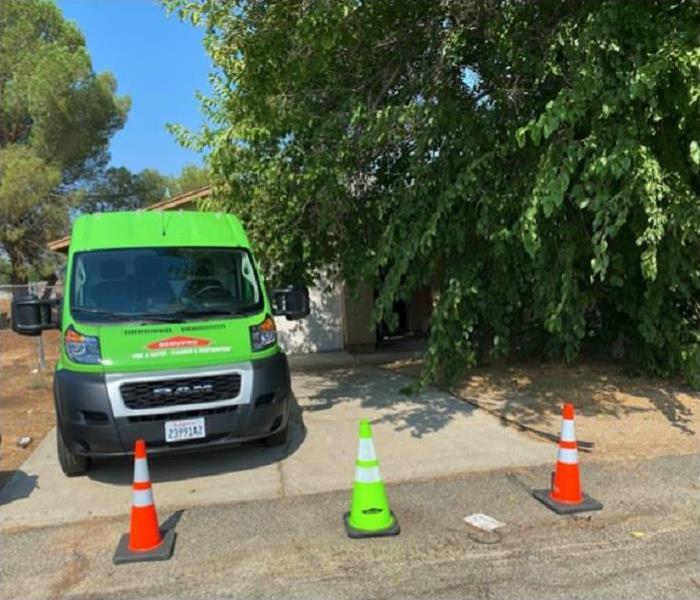 California, although scenic, is no stranger to water and fire dangers. SERVPRO knows how to restore any emergency damage your home may incur.

Palmdale's American Indian Heritage, Spanish Influence, and Rise in Aeronautics Makes it a City of Contrast.

Palmdale enjoys much of what the vast Los Angeles County has to offer. Antelope Valley and the San Gabriel Mountains help give the area a less hurried pace than Los Angeles proper while being close enough to enjoy its amenities. An ideal place to own a home and raise a family, Palmdale and neighboring Lancaster form one of California's most populous regions.

Much like the rest of the state, Palmdale is rich in history. When Native Americans inhabited it, the area was part of the California coast and present-day New Mexico and Arizona trading routes. Much of the region's exploration and opening can be attributed to Father Francisco Garces, a Spanish priest partially responsible for an expedition across the Mojave Desert. Native Americans left the land, allowing Spanish and Mexicans to set down roots and establish cattle ranches. In the late 1880s, Germans and French also claimed parcels of land, and in 1886 the village of "Palmenthal" was founded. Funnily enough, the name translates into "Palm Valley" in German, but in reality, it was a reaction from early settlers who thought the region's Joshua Trees were the palm trees they had been expecting to encounter in their journey.

Europeans were not used to farming the arid lands of the desert and were unsuccessful in doing so. Consequently, settlers abandoned the area and moved closer to the Southern Pacific Railroad railroad tracks. It was there that Palmdale was established as a city that worked around the railroad station where travel between Los Angeles and San Francisco took place. The legendary Wells Fargo stagecoach (still an emblem of the bank of the same name) also visited Palmdale when traveling from San Francisco to New Orleans.

Palmdale mirrors the growth of Los Angeles proper, and when the aqueduct system was completed, it marked a difference in Antelope Valley. With the new possibility of irrigation, crops such as apples and pears became feasible, and the region strengthened. The roots of the Antelope Valley Press were established with the publication of the Palmdale Post, and new roads were built to support trade within the region. Agriculture continued to be the primary industry until World War II when Edwards Air Force Base was built (its original name was Muroc Air Base). In the early 1950s, the aerospace industry became the strongest in the area and employed many of Palmdale's residents. The LA/Palmdale Regional Airport still exists and is run by the City of Palmdale. Lockheed Martin and Northrop Grumman are still among the top employers in the area.

As we fast-forward to the 1980s and 90s, Palmdale and Lancaster offer a unique proposition to inhabitants of Los Angeles suffering during the recession. Because its housing was more affordable than living in LA, many relocated to Palmdale during this decade, thus becoming a dormitory city. Its growth continues even today, and significant investment in transportation and infrastructure has allowed parks, entertainment venues, and senior housing to be built to meet the community's demands.

What to do While in Palmdale

Residents and visitors of Palmdale may enjoy outdoor activities virtually year-round. Because it is close to the San Andreas fault makes it vulnerable to earthquakes, but its mountains offer plenty of hiking trails.

Dry in nature, summers can be scorching, but the winter months are cool and pleasant. The following are some ideas for day-visits while in Palmdale-

Not surprisingly, the performing arts community is active in Palmdale. Several playhouse and performance venues open their doors to bring established shows and as a resource for those just entering the field. Although some venues are currently limited due to the health crisis, residents and visitors typically won't lack entertainment.

For those interested in the night sky, you may want to visit the Antelope Valley Astronomy Club, which continues to host virtual events for its stargazing audience. Some events are suitable for the whole family, while others are better for seasoned stargazers.

One of the most beautiful places in Antelope Valley is the Antelope Valley California Poppy Reserve, where wildflowers cover the rolling hills from Spring to Summer. This beautiful place allows you to relax in nature and enjoy the wildlife while you hike. You may even choose to bring a picnic and dine outdoors while appreciating the Valley and the San Gabriel Mountains.

Despite its proximity to the desert and how arid the area seems, Palmdale and its surroundings are no strangers to flooding and storm damage. Copious rain may cause water levels to rise and wreak havoc on the community, including homes and businesses. When disaster strikes, a reputable restoration company based in the area is the key to minimizing your loss and protecting you and your family. Knowing how to extract water and avoid consequences such as mold is our specialty. We train with industry experts and bring the best into your home whenever you need us.

SERVPRO of Palmdale North is at your service when you need the best in water or fire restoration. Best practices and state-of-the-art technology is what you can expect when you encounter our team. Call us at (661) 526-3649 and let us leave your home, "Like it never even happened."